With thousands watching your every move, the International Great Crate Race at the Maine Lobster Festival is one of the most challenging events of the week.  Are you brave enough to risk the fall into the Harbor?

Invented in the 1970s by William Atwood, the race was originallyl held in Spruce Head, ME at the William Atwood Lobster Company.  It became so popular, that it was moved to the Maine Lobster Festival and has become a Festival tradition, attracting competitors from all around the world.  It has also inspired similar events in Camden and Boothbay Harbor.  The Maine Lobster Festival Crate Race is managed using the same traditions as the original race.  It is truly a unique event!  The course is a string of 50 wooden lobster storage crates filled with seaweed for weight and balance, stretching across a section of the harbor in full view of the Festival grounds.  Contestants race across the unsteady crates as fast as possible to reach the other side.  Reaching the other end requires quick feet, speed, and balance.

Contestants participate in four divisions: featherweight (up to 75 pounds), lightweight (76-125 pounds), medium weight (126-175 pounds) and supersize or heavyweight (176 and heavier).  It is said that lighter weight competitors perform the best because they can stay on top of the wooden crates longer, while heavier competitors sink more.

In 2012 Connor McGonagle of Owls Head, ME smashed the previous record of 4,501 crates, set in 2008 by Andrew Bachiochi of Stafford Springs, CT. McGonagle crossed an incredible 6,000 crates.  He not only set a new, possibly unbeatable record, but also brought the winning title back to the Midcoast.  The 2013 crate race title went to the 2012 runner-up Duncan Widdecombe (pictured left), also of Owls Head, ME, with a 2,100 crate finish. 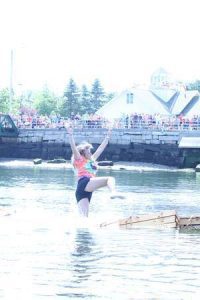 Think you have what it takes to compete?  Here are some basic crate race tips:

If you’re brave enough to run the crates this summer, sign up Sunday morning at the Information Booth.  A line begins to form at 5 a.m. for registration, so get there as early as possible since spots fill up fast and space is limited.

Read the complete coverage of the 2013 Lobster Festival Crate Race, as reported by Ken Waltz of Courier Publications.