Nightfall halted the Great International Lobster Crate Race this year, leaving us with two winners, both of whom ran 6,500 total crates.

Scarlett Flint, 7, of Warren, ME and Harrison Page, 9, of South Berwick, ME competed in the featherweight division of the Crate Race, easily moving across the string of 50 wooden lobster crates extended across Rockland Harbor on Sunday, August 3.  The two winners each broke the previous record, set by Connor McGonagle of Owls Head, ME in 2012, and contributed to setting the record for the longest crate race in length of time to date.  Crate race officials ultimately ended the race at 8:00 PM due to the darkness and lack of visibility for both race officials and runners, declaring a tie. 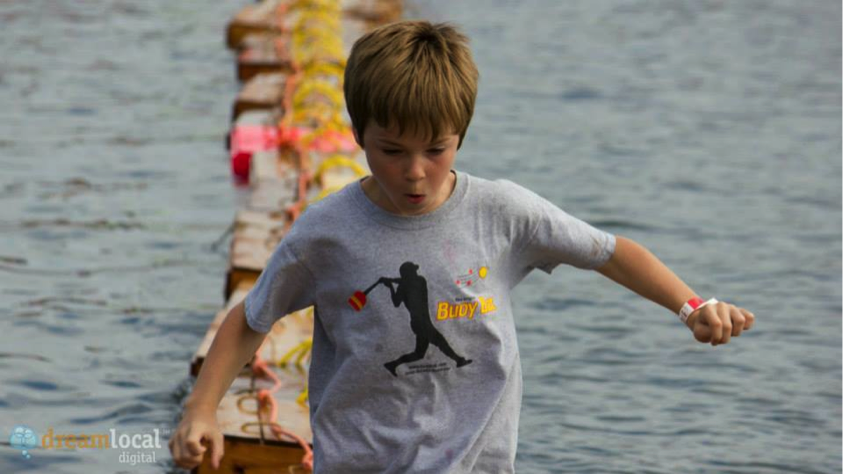 Crate race competitors participate in four divisions: Featherweight (up to 75 pounds), lightweight (76-125 pounds), medium weight (126-175 pounds), and heavyweight (176 and heavier).  The lighter competitors often perform better because they are able to stay on top of the wooden crates longer before they start to sink.

Returning 2013 winner, Duncan Widdecombe, 12, of South Thomaston, ME was the lightweight winner and runner-up overall this year, crossing 5,100 crates.  In 2012, Widdecombe was runner-up to McGonagle.  In 2013, Widdecombe would likely have broken the record, but Festival officials halted the race due to the potential threat of lightning.

Invented in the 1970s by the Atwood family, the race was originally held in Spruce Head, ME at the William Atwood Lobster Company.  It became so popular, that it was moved to the Maine Lobster Festival and has become a Festival tradition, attracting competitors from all around the world.  It has also inspired similar events in Camden and Boothbay Harbor.  The Maine Lobster Festival’s International Great Crate Race is managed using the same traditions as the original race.  It is truly a unique event!  The course is a string of 50 wooden lobster storage crates filled with seaweed for weight and balance, stretching across a section of the harbor in full view of the Festival grounds.  Contestants race across the unsteady crates as fast as possible to reach the other side.  Reaching the other end requires quick feet, speed, and balance.