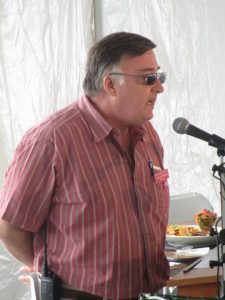 Chuck Kruger, Maine state representative and a Director of the Maine Lobster Festival Committee, has been hard at work writing a bill to help support the Maine lobster industry.  This bill’s goal is to market Maine lobster worldwide, focusing particularly on Asia and Europe.  At the 66th Annual Maine Lobster Festival on Thursday, August 1, 2013, Governor Paul LePage officially announced that the bill has passed and will be put into action in the coming months.

“We all can agree that the Lobster Festival, set on a beautiful working waterfront, is the ideal setting to discuss our common interest in promoting Maine Lobster.  State officials and Festival directors have a long history of working together in this effort, and it’s great this year brought the Governor, Commissioner of the Department of Marine Resources, the President of the Maine Lobsterman’s Association, and the director of the Lobster Promotion Council to Rockland,” Kruger said.

Before the press conference, Kruger circulated among attendees a photo from the Rockland Historical Society of then-Governor Edmund Muskie, and Commissioner of Department of Marine Resources crowning that year’s Maine Sea Goddess.  The photo would have been from sometime between 1954 to 1958.

After being introduced by Representative Kruger, Governor LePage took to the podium.  He noted that Maine lobster and other types of seafood caught off of Maine’s shore have “a reputation of coming from hard working, industrious people.  I commend them sincerely for the work they are doing.”

The announcement comes at a time when there is an abundance of Maine lobster being caught, causing boat prices to remain low, causing immense pressure on the lobstermen.  With this bill, Kruger hopes that the Maine economy will be stimulated as a result of an increase in Maine lobster purchases in the United States and around the world.  Kruger and Governor LePage both cited Hong Kong as a city that they have been in contact with to start marketing efforts. 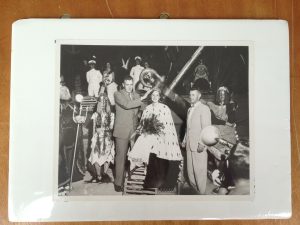 Department of Marine Resources commissioner, Patrick Keliher, also addressed the bill during the press conference, noting that Maine’s lobster industry currently faces a “serious supply and demand issue,” which is one of the primary reasons for developing this bill.  One question that seems to be on many people’s mind is: Will this help fisherman?  To this, Keliher says, “If we do nothing, we’ll receive nothing.”  At the moment, Maine spends less than $500,000 marketing Maine lobster, compared to industries like the Alaskan Seafood Marketing Institute, which budgets about $21 million per year on marketing their industry.  Their efforts include a recent partnership with Nordic skiing World Champion Kikkan Randall to promote the health and fitness benefits of Alaska Seafood.   Taking action to promote the Maine lobster industry and turn it into an internationally recognized brand is something that will help lobstermen by increasing the boat price and overall profitability.

President of the Maine Lobstermen’s Association, David Cousens, explained at the conference a number of reasons for the current abundance of lobsters, noting the V-notch practice that lobstermen must use.  Female lobsters who are caught and are found to be carrying eggs must have a V-notch cut into the ends of their tails, indicating that they are breeding females and must never be caught and sold.  All V-notch lobsters must be thrown back into the water.  Cousens, who will be involved with the Marine Resources Committee under this bill, discussed some marketing strategies that will be used.  He particularly mentioned the many health benefits of eating lobster: they are high in Omega-3 fatty acids, a great source of protein and vitamin B12, and can help prevent cardiovascular disease.

Kerry Alteiro, local chef at Café Miranda in Rockland, pointed out “when lobstermen do badly, my restaurant does badly.”  He expressed his support of this bill, and even featured a lobster salsa dish that he created and called “Lobster a la LePage.”

The Maine Lobster Festival was happy to host these guests on the second day of the Festival, and on the first official day of “Lobster Month.”  We would like to give a special thanks to the Maine Lobster Promotion Council, the Maine Lobstermen’s Association, and the Department of Marine Resources for their support during this exciting time for Maine’s lobster industry.