The American Bus Association (ABA) recently announced the Top 100 Events in North America, and the Maine Lobster Festival was chosen as one of the events in 2014.  The Top 100 Events receive worldwide attention, recognizing the best events for group travel in the United States and Canada on an annual basis.  The ABA distributes more than 10,000 copies of the Top 100 Events magazine to members and travelers worldwide. 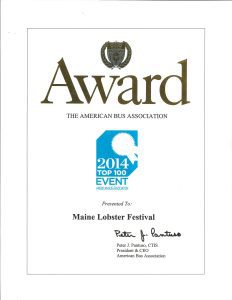 A panel of ABA-member bus and tour operators selected each of the events from more than 580 entries nominated by ABA members. The winners for 2014 will be published this month in a special supplement to Destinations, ABA’s award-winning magazine, and publicized through an ABA press release to North American media.

The Maine Lobster Festival is a non-profit organization that holds the Festival each year to raise funds for local scholarships, community organizations, and student groups.  The Festival is honored to receive this recognition from the ABA.  We welcome thousands of visitors to Rockland, Maine for the Maine Lobster Festival, and we work hard year after year to make transportation to the Festival grounds efficient for all visitors.  With the help of Luce Transportation of Union, Maine, we are able to offer free shuttle transportation from two parking lots in Rockland to Harbor Park.  The bus drivers shuttle Festival visitors from parking lots at Oceanside High School East (formerly known as Rockland District High School) and Rockland District Middle School to the grounds at Harbor Park.  As a historic, New England town, the city of Rockland has limited parking available near the grounds, so our shuttle services allow us to accommodate all of our visitors.

The 67th Annual Maine Lobster Festival will take place from July 30 – August 3, 2014.  We look forward to welcoming many visitors to feast on local, freshly caught seafood and enjoy the many fun events that take place throughout the week.

Five days of fun and feasting on the fabulous coast of Maine!  The Maine Lobster Festival attracts thousands of people to Maine’s Midcoast region, and has a long tradition of giving back to the local community.  In recent years, the Festival committee has given more than $500,000 to the local community through support for Midcoast Regional Child Development Services, Trekkers, Meals on Wheels, and much more!  For more information about the Maine Lobster Festival, visit our website at https://www.mainelobsterfestival.com/ and be sure to “like” us on Facebook, or follow us on Twitter at @MELobsterFest.

The American Bus Association (ABA) represents approximately 1,000 motorcoach and tour companies in the United States and Canada.  Founded in 1926, the ABA’s mission is to advance North American motorcoach travel to fulfill the transportation and travel needs of the public.  For their complete list of 2014 Top 100 Events winners, click here.  The American Bus Association can also be found on Facebook, Twitter, and LinkedIn.